Concrete is the second most-consumed material on Earth, after water. But when it comes to innovation, it can be seen as a laggard. Concrete uses cement, which is resource-intensive—responsible for 7 percent of the world’s total carbon emissions. It also breaks down easily, as evidenced by the United States’s crumbling infrastructure. As the extreme conditions caused by climate change put additional pressure on our buildings, bridges, and roads, maintenance becomes more necessary and more costly—particularly now, as we face labor shortages in a sector needing innovation in worker safety.

Engineered Cementitious Concrete (ECC) is a flexible alternative that is already in use around the world today. Developed by Victor C. Li and his colleagues in the UM Departments of Civil and Environmental Engineering, this advanced fiber-reinforced concrete behaves in some ways more like a metallic material—particularly in the way it responds to loads. The microcracks it sustains under duress do not compromise a structure in the same way that larger cracks would in traditional, steel-reinforced concrete.

“We have learned from nature the ways in which smarter, better, more durable concrete can make our infrastructure stronger and more resilient,” says Li, who cites as one inspiration nacre, also known as mother of pearl—the iridescent material on the inside of abalone shells that is hard yet flexible. ECC is created with this idea in mind; the controlled slippage of fibers distributed in the composite mirroring nacre’s “give” when tested.

ECC is now in use today in six out of the world’s seven continents. In Asia, the material is in Japan’s tallest residential tower, Kitahama, in Osaka, as well as in the jointless Mihara bridge in Hokkaido. The use of ECC on the the Grove Street Bridge deck over I-94 in Ypsilanti, Michigan, is estimated to have a cost savings of 37 percent and carbon emissions reduction of 39 percent. 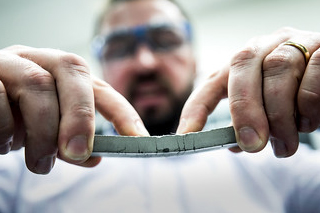 “ECC meets all the requirements: It’s ecological, ductile, and durable. That is the trifecta for impact in civil engineering.”